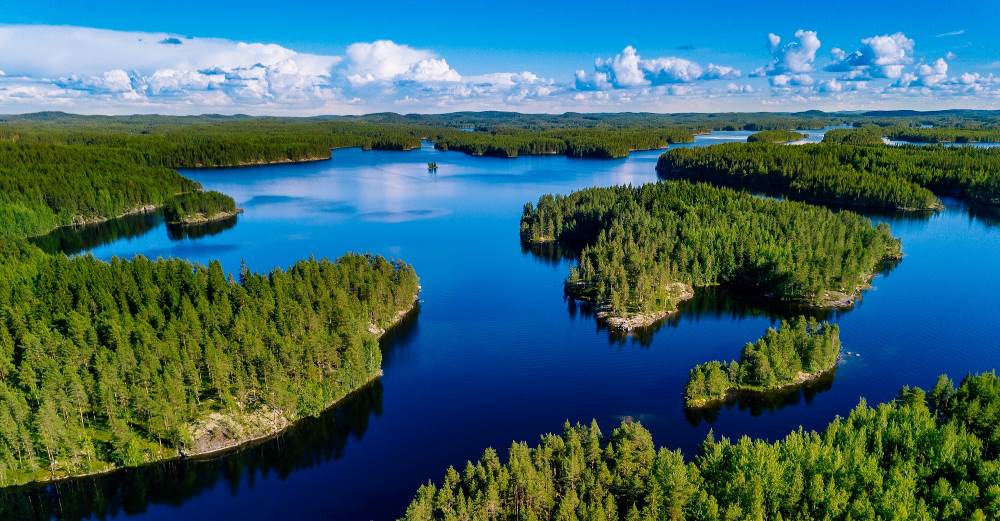 FINLAND – THE LAND OF A THOUSAND LAKES

Deep blue lakes, long and bright summer nights, sauna culture, Orthodox churches, and world-class design. All of this characterizes Finland and can be experienced on this tour.

The route leads through the enchanting landscape of southern Finland to Oulanka National Park on the Arctic Circle, one of the most visited Finnish National Parks. Back in the south of Finland you can cycle along the diverse Gulf of Bothnia past rugged islands, soft sandy beaches and a vast dune landscape.

The route leads through the enchanting seascape and on the way some of the most beautiful and possibly oldest cities in Finland are waiting to be explored. These include the picturesque small town of Porvoo, whose cozy old town with its picturesque wooden houses invites you to take a leisurely stroll. Or Jyväskylä where the work of the famous designer and architect Alvar Aalto can be admired.

Let’s not forget the lively metropolis of Helsinki which enchants with its many magnificent churches and maritime flair.

Day 1: Stockholm – Helsinki
The trip begins in Stockholm by embarking on the SILJA LINE ferry to Helsinki, the capital of Finland. Helsinki, also called “the Daughter of the Baltic Sea” is a lively city by the sea surrounded by enchanting nature.

Day 2: Stay in Helsinki
Helsinki is wonderful to explore by foot or tram. The city is known for its many impressive churches. In addition to the Helsinki Cathedral we also recommend a visit to the Tempelliaukio Kirkko one of the most unusual churches in the world, blasted into a rock.

Day 3: Helsinki – Imatra
Today the trip goes Northeast to Imatra near the Finnish- Russian border. A stopover in Porvoo, only about an hour east of Helsinki is well worthwhile. Porvoo is one of the most oldest and beautiful cities in Finland. The cozy old town with its picturesque wooden houses, charming small shops and historical sights invites you to explore the city.

Day 4: Imatra – Nurmes
An unforgettable journey through the deep blue lake landscape of Finland is imminent. On the way there is a possibility to stop in Savonlinna: The city best known for its 500 year old fortress Olavinlinna and opera festival that has been performed annually since 1967. Today’s destination is Nurmes at the crystal clear Pielinen Lake. A highlight would also be a visit to the open-air museum Murtovaara approx. 35 kilometers east of Nurmes.

Day 5: Nurmes – Kuusamo
Today the journey continues through the vast forests to Kuusamo, the gateway to Lapland; in the immediate vicinity is the Oulanka National Park. It is one of the most visited national parks in Finland and is best known for its remarkable rapids.

Day 6: Kuusamo – Oulu
Today’s journey heads south again to the West coast of Finland. The destination of the day is Oulu the fourth largest city in Finland situated idyllically on the Gulf of Bothnia. The oldest wooden church in Finland can be visited in Muhos, 30 kilometers southeast of Oulu.

Day 7: Oulu-Vaasa
Continue South along the Gulf of Bothnia via Luoto to Vaasa. A stop in Kalajoki should be made along the way; The coastal town captivates with its 10-kilometer-long sandy beaches and its dune landscape.

Day 8: Vaasa – Jyväskylä
Nowhere else can you find as many buildings designed by Alvar Aalto as you can in Jyväskylä. The world renowned architect grew up here, and a visit to the Alvar Aalto museum is a must see while in Jyväskylä.

Day 9: Vaasa – Turku – Stockholm
Today we continue to Turku, Finland’s oldest city. We recommend a stopover in Tampere with its many museums such as the Moomin Museum, the Spy Museum or the Stroller Museum. At 168 meters the Näsinneula observation tower is the second highest in Northern Europe and offers breathtaking views of Tampere and the surrounding areas. In the evening embark on one of the SILJA LINE ferries from Turku to Stockholm.